Finally Out Of The Closet-Navy Top

After purchasing this top last October I have tried it on and taken it off so many times I thought that maybe it was a lost cause! 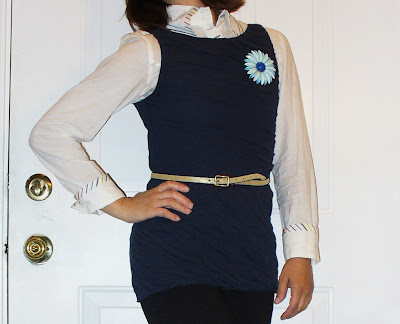 A sleeveless, navy top sounds so easy, right? It's kind of hard to tell from the pictures, but the texture is actually very interesting, it has a sort of soft netting draped in all directions which makes it slightly puffy but not unflattering. I thought for sure I'd wear it with everything! Yet for whatever reason, it remained folded, never worn, in my dresser.

After my last post, I had to figure out what to do with it. I wore it to work with a simple pencil skirt and it was fine but sort of boring, and perhaps that's what kept me from wearing it before. Blah. But after having a discussion about men's wear with a girlfriend recently, I decided to move into an entirely different direction with it, and I love how it worked out... 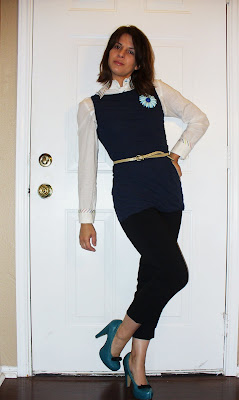 Strangely enough, most of the items that I'm wearing have been laying around dormant in my closet anyway. Layered over a simple white button down shirt, a rarely worn item itself, and an old pair of cropped pants, not worn in probably 4 years, I ended up with a very "geek chic" kind look and I love it! The gold belt was an early summer purchase, (never worn,) and the flower broach is vintage and made of metal which makes it very heavy and hard to wear on delicate fabrics. And the heels were the finishing touch to keep the look more feminine.

What a fabulous brooch!

Ah, I so love how you've styled this top! That brooch makes me think of Carrie Bradshaw!! :)

great outfit! everything goes perfectly together, love it!

I love the preppy look! AND YES Kanye is comming! They only have sunday tickets for sale now :/
If you happen to find tickets take lots of photos!!!

this is SUCH a great outfit! It's classic and timeless and playful all at the same time. Those heels are killing me. (In the best of ways of course!)

Beautiful pictures, love the way u styled it, looks amazing

Well I love it, but I can see why you're getting stuck. I have a sweater vest (sort of?!) that I've found really difficult to remix.

I love the way you wore it, especially with the shoes!

I love how you styled it; very preppy chic. :)

WONDERFUL BLOG!
HI! my name's martina and I come from Italy... I'd like you visit my blog and if you want.... follow me! I wait you and your tips!
Thanks! kisses, Marti! ;DDDDD
Glamour Marmalade

OH! I love how you layered this top over your collared shirt, adore adore this look!

this look is extremely flattering!
i can see how the vest could be a difficult item to integrate into an outfit but you done nailed it!!